The Weasel (Mustela nivalis) is the smallest of all species of the Carnivora order, making it the smallest true carnivore.

The least weasel is commonly found in meadows, marshes, farmlands, prairies, semi-deserts and grassy fields, yet tends to avoid woodlands, sandy deserts and open spaces. It often remains unnoticed, although the population may be abundant.

The least weasel has a long, slender body with short, fine underfur and longer guard hairs. It possesses a flat, narrow head, with black eyes and round ears. It has short limbs with its feet having five fingers with sharp claws. In the summer, the least weasel's upperparts are a rich chocolate brown and the underparts are white. In the winter (in northern areas where snow is common) the pelage is completely white and remains brown in southern regions . Males are larger than females:

Mustela nivalis is active year-round. It is neither nocturnal nor diurnal. It spends its time, day and night, hunting, feeding, and sleeping. When the least weasel hunts, it watches its prey's movements before attacking. It will then dart erratically from side to side and rush its victim. Once encountered, the least weasel wraps itself around its victim and kills with a bite to the base of the skull. Both male and female least weasels have body diameters no larger than their prey, which allows them to to follow their prey into burrows, tunnels, and matted grass. Least weasel trails have explored holes, nooks and crannies in rock walls, under buildings, in root systems, trees, and under the snow. They also tunnel in deep snow .

The least weasel will cover an area of two acres while searching for prey, and commonly will have more than one den. When it can, a weasel will kill more than it can eat when prey is available, and stores it in its den for future meals . The weasel has been known to do a sort of 'dance' in front of rabbits, rolling and thrashing around until the rabbits, lured into a semi-hypnotised state, come closer, whereupon the weasel whips round and sinks its teeth into the unfortunate creature's neck.

Small rodents make up the majority of the least weasel's diet. On average, this small carnivore must consume half of its body weight every day to survive. This is about two deer mice or one meadow vole each day . When rodents are not readily available, the least weasel will eat birds' eggs, nestlings, insects, and lizards. In the extreme northern populations Mustela nivalis will eat carcasses of brown lemmings. However they also eat rabbits from time to time, though not quite as often as the smaller animals. Despite its tiny size, the Least Weasel is capable of killing a rabbit 5-10 times its own weight, the equivalent of a male lion killing a female Asian elephant.

Male least weasels reach sexual maturity at eight months, while females reach maturity at four months. Males are sexually active throughout the year but most breeding occurs in spring and late summer . Female least weasels will have multiple litters throughout the year, which is different from the long-tailed weasel and ermine. The gestation period is 35 days. Females care for and nurse their young until they become independent.

Litters may range from 1-6 and the young are born wrinkled, pink, naked, blind and deaf . At 11 days, the young are covered with a fine white body hair, and by 18 days they have brown hair on their backs with white bellies. At this point, the young are eating solid food . The least weasel is able to kill prey at 40 days into their lifespan. 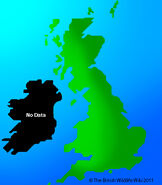 Distribution of Weasels in the UK
Add a photo to this gallery
Retrieved from "https://britishwildlife.fandom.com/wiki/Weasel?oldid=28407"
Community content is available under CC-BY-SA unless otherwise noted.