The Stoat, Mustela erminea, also known as an Ermine, and less frequently as a Short-tailed Weasel, the stoat can be easily confused with weasels, due to their near-identical size and colouring (as each belongs to the family Mustelidae, and are quite closely related).
Stoats are carnivorous, and will eat any prey ranging from insects and birds’ eggs to mammals much larger than itself; they are generally most active stoat coexist, the weasel will hunt smaller prey, and the stoat larger prey. Stoats kill their prey with a single bite to the back of the neck, which kills the prey almost immediately. They are often a pest to smallholders for killing poultry and game.

Their numbers dropped dramatically when myxomatosis (fatal disease affecting rabbits, carried by insects) was introduced, but have since adapted and are a fairly common species.

Size - Adult males are much larger than the females, and can grow to be up to 30cm in length.

Stoats have a long, lithe body with short legs, small ears, and a notably fast metabolism. This is used as a compensation for the stoat’s large surface area-to volume ratio; this means that the stoat has more space to lose heat from its body, and so has evolved these traits to conserve warmth.
The stoat’s long shape enables it to be one of the few predators to follow its prey into their own burrows, which it can then cache to eat later.

During the spring and summer, the stoat’s coat is a rich red-brown with an off –white or cream underside. In the winter months, this coat becomes thicker to conserve heat, and, in areas that experience regular snow, the coat turns a pure white (this is when the stoat is known as an ermine)
In all seasons, the stoat has a black tip on its tail; this is what distinguished it from the weasel, which lacks any such marking.

Habitat
The stoat is native to the upper northern hemisphere – including Northern America and most of northern Europe – although it has been introduced to countries such as Australia and New Zealand as an unsuccessful bid to cut the rabbit population, and have since spread to other islands unaided by swimming.

Stoats are highly territorial, and intolerant of any others in its range - especially those of the same gender. They are generally solitary, only seen in numbers to mate, or when a mother has older offspring.  Females usually produce several kits once per year, and can hold fertilized eggs in suspended animation until the right time.

Distribution of Stoats in the UK 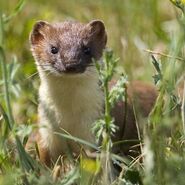