The Starling (Sturnus Vulgaris) is one of the most common birds in Britain. There are more than four million mating pairs within Britain.  These can be joined by as many 30 million migrant Starlings from eastern Europe during the winter. Number of starlings have increased over the years. Some theories suggest this is because of its varied and wide diet.  Depending on the time of the year it will eat, household waste, seeds, insects, and contents on bird tables.

Flocks of starlings will soon emerge if they see one starling pecking away. This enables them to feed more and look for predators. They will fight if the food supply runs out. They may ruin crops and fruit trees but they are valuable to farmers as they kill leather jackets and other pests.  The nest is sited in a hole on in a wall or tree. It is very untidy and is made from straw, grass and leaves. The male will build a nest before pairing starts. The female will lay five to seven eggs and they take two weeks to hatch.

It is among the most familiar of birds in temperate regions. It is 19–22 cm long, with a wingspan of 37–42 cm and a weight of 60–90 g. The plumage is shiny black, glossed purple or green, and spangled with white, particularly strongly so in winter. Adult male European Starlings are less spotted below than adult females. The throat feathers are long and loose, and used as a signal in display. Juveniles are grey-brown, and by their first winter resemble adults though often retain some brown juvenile feathering especially on the head in the early part of the winter. The legs are stout, pinkish-red. The bill is narrow conical with a sharp tip; in summer, it is yellow in females, and yellow with a blue-grey base in males, while in winter, and in juveniles, it is black in both sexes. Moulting occurs once a year, in late summer after the breeding season is finished; the fresh feathers are prominently tipped white (breast feathers) or buff (wing and back feathers). The reduction in the spotting in the breeding season is achieved by the white feather tips largely wearing off. Starlings walk rather than hop. Their flight is quite strong and direct; they look triangular-winged and short-tailed in flight.

Confusion with other species is only likely in Iberia, the western Mediterranean and northwest Africa in winter, when it has to be distinguished from the closely related Spotless Starling, which, as its name implies, has less spotting on its plumage. The Spotless Starling can also be diagnostically distinguished at close range by its longer throat feathers. At a more basic level, adult male European Blackbirds can easily be distinguished by more slender body shape, longer tail, and behaviour; they hop instead of walking and do not probe for food with open bills. In flight, only the much paler waxwings share a similar flight profile.

The Common Starling is a noisy bird uttering a wide variety of both melodic and mechanical-sounding sounds, including a distinctive "wolf-whistle". Starlings are mimics, like many of its family. In captivity, Starlings will learn to imitate all types of sounds and speech earning them the nickname "poor-man's Myna".

Songs are more commonly sung by males, although females also sing. Songs consist of a mixture of mimicry, clicks, wheezes, chattering, whistles, rattles, and piping notes. Besides song, 11 other calls have been described, including a Flock Call, Threat Call, Attack Call, Snarl Call, and Copulation Call. Birds chatter while roosting and bathing—making a great deal of noise that can frustrate local human inhabitants. Even when a flock of starlings is completely silent, the synchronized movements of the flock make a distinctive whooshing sound that can be heard hundreds of meters away.

European Starlings prefer urban or suburban areas where artificial structures and trees provide adequate nesting and roosting sites. They also commonly reside in grassy areas where foraging is easy—such as farmland, grazing pastures, playing fields, golf courses, and airfields. They occasionally inhabit open forests and woodlands and more rarely in shrublands such as the Australian heathland. European Starlings rarely inhabit dense, wet forests (i.e. rainforests or wet sclerophyll forests). Common starlings have also adapted to coastal areas, where they nest and roost on cliffs and forage amongst seaweed. Their ability to adapt to a large variety of habitats has allowed for their dispersal and establishment throughout the world—resulting in a habitat range from coastal wetlands to alpine forests, from sea level to 1900 meters above sea level.

Widespread throughout the northern hemisphere, the European Starling is native to Eurasia and is found throughout Europe, northern Africa (from Morocco to Egypt), northern India, Nepal, the Middle East (including Syria, Iraq, and Iraq), and north-western China. Furthermore, it has been introduced to and successfully established itself in New Zealand, Australia, North America, Fiji, and several Caribbean islands. As a result, it has also been able to migrate to Thailand, Southeast Asia, and New Guinea.[1]In Australia, European Starlings are referred to as the Common Starling, and are present throughout the southeast, although some isolated populations have been observed in northern and Western Australia. They are prevalent throughout New South Wales, Victoria, Queensland, Tasmania, and scattered sites in the southeastern part of Western Australia.

It is a highly gregarious species in autumn and winter. Flock size is highly variable, with huge flocks providing a spectacular sight and sound usually occurring near roosts. These huge flocks often attract birds of prey such as Merlins or Sparrowhawks. Flocks form a tight sphere-like formation in flight, frequently expanding and contracting and changing shape, seemingly without any sort of leader. Very large roosts, exceptionally up to 1.5 million birds, can form in city centres, woodlands, or reedbeds, causing problems with their droppings. These may accumulate up to 30 cm deep, killing trees by their chemical concentration; in smaller amounts, the droppings are, however, beneficial as a fertiliser, and therefore woodland managers may try to move roosts from one area of a wood to another to spread the benefit and avoid large toxic deposits.

Huge flocks of more than a million Starlings are observed just before sunset in spring in southwestern Jutland, Denmark. There they gather in March until northern Scandinavian birds leave for their breeding ranges by mid-April. Their flocking creates complex shapes against the sky, a phenomenon known locally as sort sol ("Black Sun"). To witness this spectacle, the best place are the seaward marshlands (marsken in Danish) of Tønder and Esbjerg municipalities between Tønder and Ribe.

Flocks of anything from five to fifty thousand Starlings form in areas of the UK just before sundown during mid winter. These flocks are commonly called a Starling "Moot" or murmuration.

Starlings are hunted by birds of prey, including the Peregrine Falcon and Brown Falcon. However, in the 1970s the consumption of chemically treated (DDT) crops by the starlings which were subsequently eaten by Peregrine Falcons caused a dangerous build-up of the toxin in the falcon. As a result, lower reproductive success was observed as a result of thinner eggshells and a build-up of organochlorine residues in eggs.

European Starling nests are especially vulnerable to predators such as stoats, foxes, and humans. Common Mynas are also a threat, as they often evict eggs, nestlings, and adult starlings from their nests.

The European Starling is insectivorous, and typically consumes insects including caterpillars, moths, and cicadas, as well as spiders. While the consumption of invertebrates is necessary for successful breeding, starlings are omnivorous and can also eat grains, seeds, fruits, nectars, and garbage, if the opportunity arises. There are several methods by which they forage for their food; but for the most part, they forage from or near the ground, taking insects from or beneath the surface of the soil. Generally, starlings prefer foraging amongst short-cropped grasses and are often found between and on top of grazing animals out to pasture. Large flocks forage together, in a practice called “roller-feeding”: where the birds at the back of the flock continually fly to the front of the flock as they forage so that every bird has a turn to lead (1957). The larger the flock, the nearer individuals are to one another while foraging. Flocks often forage in one place for some time, and return to previous successfully foraged sites. There are four types of foraging observed in the European Starling:

Among European Starling, sallying and probing are the most common foraging behaviors.

Unpaired males begin to build nests in order to attract single females. Males often decorate the nest with ornaments (such as flowers) and fresh green material which the female later disassembles upon accepting him as a mate .[2]The males sing throughout much of the construction and even more so when a female approaches his nest. Following copulation, the male and female continue to build the nest. Common nesting locations include inside hollowed trees, buildings, tree stumps, and man-made nest-boxes. Nests are typically made out of straw, dry grass, twigs and inner lining made up of feathers, wool, and soft leaves. Construction typically takes 4 to 5 days and may continue through incubation. Fresh herbs are added to nests and work as insect repellent.

Starlings are both monogamous and polygamous; although broods are generally brought up by one male and one female, occasionally the pair may have an extra helper. Pairs may be part of a larger colony, in which case several other nests may occupy the same or nearby trees.

The breeding season begins in early spring and summer. In Australia, eggs are typically laid from late September to late November but the range extends from late July to December. Following copulation, female European Starlings will lay an egg on a daily basis over a period of several days. If an egg is lost during this time period, she will lay another egg to replace it. The eggs (4-5) are small elliptical blue (and occasionally white) eggs that commonly have a glossy appearance to them. Incubation lasts 13 days, although the last egg laid may take 24 hours longer than the first to hatch. Both parents share the responsibility of sitting on top of the eggs. However, the female spends more time incubating the eggs than the male, and is the only parent to do so at night (while the male returns to the communal roost). The young are born blind and naked. They develop light fluffy down within 7 days of hatching and sight within 9 days. Nestlings remain in the nest for 3 weeks, where they are fed continuously by both their parents. Fledglings continue to be fed by their parents for 1–2 weeks. Pairs can raise up to three broods per breeding season, frequently reusing and relining the same nest. Within two months, most juveniles have molted and gained their first basic plumage. Juveniles acquire their adult plumage the following year.

Intraspecific brood parasites are common in European Starling nests. Female "floaters" (unpaired females during the breeding season) present in colonies often lay eggs in another pair's nest. Additionally, fledglings have been reported to invade their previous nests or neighboring nests and evicting the new brood.

Description: Plumage is a mix of iridescent black, greens and some purple. The bill is bright yellow. 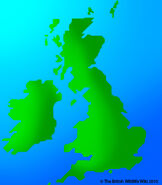 Distribution of Starlings in the UK 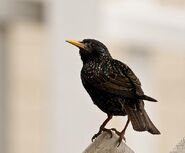 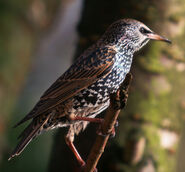 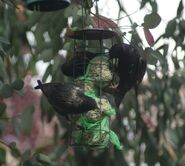 Adult Starlings on a fat ball feeder - WWC Archives
Add a photo to this gallery
Retrieved from "https://britishwildlife.fandom.com/wiki/Starling?oldid=32413"
Community content is available under CC-BY-SA unless otherwise noted.