The Red Squirrel (Sciurus vulgaris L) is a species of tree squirrel (genus Sciurus). A tree-dwelling omnivorous rodent, the red squirrel is common throughout Eurasia.

In Great Britain and Ireland, numbers have decreased drastically in recent years, largely because of the introduction of the eastern grey squirrel (Sciurus carolinensis) from North America.

The coat of the red squirrel varies in colour with time of year and location. There are several different coat colour morphs ranging from black to red. Red coats are most common in Great Britain; in other parts of Europe and Asia different coat colours co-exist within populations, much like hair colour in some human populations. The underside of the squirrel is always white-cream in colour. The red squirrel sheds its coat twice a year, switching from a thinner summer coat to a thicker, darker winter coat with noticeably larger ear-tufts (a prominent distinguishing feature of this species) between August and November. A lighter, redder overall coat colour, along with the larger ear-tufts (in adults) and much smaller size, distinguish the Eurasian red squirrel from the American eastern grey squirrel.

The red squirrel, like most tree squirrels, has sharp, curved claws to enable it to climb and descend broad tree trunks, thin branches and even house walls. Its strong hind legs enable it to leap gaps between trees.The red squirrel also has the ability to swim.

Mating can occur in late winter during February and March and in summer between June and July. Up to two litters a year per female are possible. Each litter usually contains three or four young although as many as six may be born. Gestation is about 38 to 39 days. The young are looked after by the mother alone and are born helpless, blind and deaf and weigh between 10 and 15 g. Their body is covered by hair at 21 days, their eyes and ears open after three to four weeks, and they develop all their teeth by 42 days. Juvenile red squirrels can eat solids around 40 days following birth and from that point can leave the nest on their own to find food; however, they still suckle from their mother until weaning occurs at 8 to 10 weeks.

During mating, males detect females that are in œstrus by an odor that they produce, and although there is no courtship the male will chase the female for up to an hour prior to mating. Usually multiple males will chase a single female until the dominant male, usually the largest in the group, mates with the female. Males and females will mate multiple times with many partners. Females must reach a minimum body mass before they enter œstrus, and heavy females on average produce more young. If food is scarce breeding may be delayed. Typically a female will produce her first litter in her second year.

The lifespan of the red squirrel is on average 3 years, although individuals may reach 7 years of age, and 10 in captivity. Survival is positively related to availability of autumn–winter tree seeds; on average, 75–85% of juveniles disappear during their first winter, and mortality is approximately 50% for winters following the first.

The red squirrel is found in both coniferous forest and temperate broadleaf woodlands. The squirrel makes a drey (nest) out of twigs in a branch-fork, forming a domed structure about 25 to 30 cm in diameter. This is lined with moss, leaves, grass and bark. Tree hollows and woodpecker holes are also used. The red squirrel is a solitary animal and is shy and reluctant to share food with others. However, outside the breeding season and particularly in winter, several red squirrels may share a drey to keep warm. Social organization is based on dominance hierarchies within and between sexes; although males are not necessarily dominant to females, the dominant animals tend to be larger and older than subordinate animals, and dominant males tend to have larger home ranges than subordinate males or females.

The red squirrel eats mostly the seeds of trees, neatly stripping conifer cones to get at the seeds within. Fungi, nuts (especially hazelnuts but also beech and chestnuts), berries and young shoots are also eaten. Often the bark of trees is removed to allow access to sap. Between 60% and 80% of its active period may be spent foraging and feeding. Excess food is put into caches, either buried or in nooks or holes in trees, and eaten when food is scarce. Although the red squirrel remembers where it created caches at a better-than-chance level, its spatial memory is substantially less accurate and durable than that of grey squirrel; it therefore will often have to search for them when in need, and many caches are never found again. No territories are maintained, and the feeding areas of individuals overlap considerably.

The active period for the red squirrel is in the morning and in the late afternoon and evening. It often rests in its nest in the middle of the day, avoiding the heat and the high visibility to birds of prey that are dangers during these hours. During the winter, this mid-day rest is often much more brief, or absent entirely, although harsh weather may cause the animal to stay in its nest for days at a time.

Arboreal predators include small mammals including the pine marten, wild cats, and the stoat, which preys on nestlings; birds, including owls and raptors such as the goshawk and buzzards, may also take the red squirrel. The red fox, cats and dogs can prey upon the red squirrel when it is on the ground. Humans influence the population size and mortality of the red squirrel by destroying or altering habitats, by causing road casualties, and by controlling populations by hunting.

The red squirrel is protected in most of Europe, as it is listed in Appendix III of the Bern Convention; it is listed as Least Concern on the IUCN Red List. In some areas it is abundant and is hunted for its fur. Although not thought to be under any threat worldwide, the red squirrel has drastically reduced in number in the United Kingdom. Fewer than 140,000 individuals are thought to be left, approximately 85% of which are in Scotland. The introduction of the eastern grey squirrel from North America is a major cause of this decline, but the loss and fragmentation of its native woodland habitat also remains a problem in some areas, though it should be noted that woodland area is now on the increase in Britain.

In order to conserve the remaining numbers of the red squirrel, the UK government in January 2006 announced a mass culling programme for the eastern grey squirrel. This was welcomed by many conservation groups. An earlier cull of the eastern grey squirrel began in 1998 on the North Wales island of Anglesey. This facilitated the natural recovery of the remaining red squirrel populations and has been followed by the successful reintroduction of the red squirrel into Newborough Forest. The UK has established a local programme known as the "North East Scotland Biodiversity Partnership", an element of the national Biodiversity Action Plan. This programme is administered by the Grampian Squirrel Society, with an aim of protecting the red squirrel; the programme centres on the Banchory and Cults areas. In 2008, the Scottish Wildlife Trust announced a four year project which commenced in the spring of 2009 called "Saving Scotland's Red Squirrels".

There are several other local conservation groups in the UK, for example, the Red Squirrel Conservation group in Mallerstang, Cumbria, and the National Trust reserve in Formby.

The eastern grey squirrel population appears to be able to out-compete the red squirrel for various reasons:

It is worth noting that the eastern grey squirrel and the red squirrel are not directly antagonistic towards each other, and direct violent conflict between these species is not a factor in the decline in red squirrel populations. 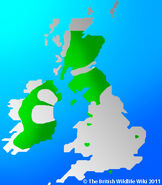 Distribution of Red Squirrels in the UK
Add a photo to this gallery
Retrieved from "https://britishwildlife.fandom.com/wiki/Red_Squirrel?oldid=32348"
Community content is available under CC-BY-SA unless otherwise noted.