British Wildlife Wiki
Register
Don't have an account?
Sign In
Advertisement
in: Mammals, Terrestrial Mammals, Native to UK,
and 3 more

The Red Deer (Cervus elaphus) is Britain's largest native land mammal. This large animal is often seen active both during the day and the night, though it tends to be more active during the night in areas where hunting takes place. The stags (male) and hinds (female) live in separate herds except during the rutting season in autumn. Habitating mainly woodland areas in fairly small groups but then travels in much larger herds in the highlands. They move uphill during the day to graze and then migrate downhill at night to find shelter. They eat heather, lichens, grasses, but they are also hardy creatures as their digestive system can cope with most vegitation they encounter. They have also adapted to the harsh highland winters, as they have learnt to dig through snow to find the succulent grasses beneath. There about and quarter of a million Red Deer in Scotland and this limits the amount of regeneration of trees and other vegetation, which may, someday, give them a pest status as they are eating crops and taking food from other species. Mainly found in the northern parts of the UK including; Scotland, the Lake District, Exmoor, Quantocks and New Forest.

Mating takes place during the autumn and the hind separate in the spring. They move to a quiet place where the single calf is born (sometimes it can be two), which is born in May- June time. It is initially covered in white spots for camouflage and can run within eight hours of birth. It depends on its mother until it is 9 months old when it starts to feed for itself. It then stays with its mother until the following autumn and will sexually mature at three years of age.

Description: Dark red or brown with buff markings to inner thighs. In winter is a darker brown or grey with lighter markings in the other areas. Male grows large branching antlers. which are shed during February, a new set is grown by autumn.

Signs: Droppings and footprints. also in their habitat you will also find torn branches and leaves where they pluck the leaves from the bushes. 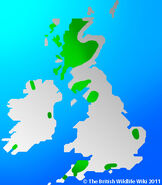 Distribution of Red Deer in the UK