The Polecat (Mustela putorius), is a species of Mustelid native to western Eurasia and North Africa. It is of a generally dark brown colour, with a pale underbelly and a dark mask across the face. Compared to weasels and minks, the polecat has a shorter, more compact body, a more powerfully built skull and dentition and is less agile in its movements.

It is much less territorial than other Mustelids, with animals of the same sex frequently sharing home ranges. Like other Mustelids, the Polecat is polygamous, though pregnancy occurs directly after mating, with no induced ovulation. It usually gives birth in early summer to litters consisting of 5-10 kits, which become independent at the age of 2–3 months. The European polecat feeds on small rodents, birds, amphibians and reptiles. It occasionally cripples its prey by piercing its brain with its teeth and stores it, still living, in its burrow for future consumption.

The Polecat is the sole ancestor of the ferret, which was domesticated more than 2000 years ago for the purpose of hunting vermin. The species has otherwise been historically viewed negatively by humans. In the British Isles especially, the polecat was persecuted by gamekeepers. During modern times, the polecat is still scantly represented in popular culture when compared to other rare British mammals, and misunderstandings of its behaviour still persist in some rural areas. Another, older name for the Polecat is the 'foulmart', because of its pungent smell. The Pine Marten is called the 'sweetmart' (presumably because it smells nicer!).

The general appearance of the European polecat is typical of members of the genus Mustela, though it is generally more compact in conformation and, although short-legged, is not as elongated in body as the European mink. The tail is short, about ⅓ its body length. The eyes are small, with dark brown irises. The hind toes are long and partially webbed, with weakly curved 4 mm long non-retractable claws. The front claws are strongly curved, partially retractable, and measure 6 mm in length. The feet are moderately long and more robust than in other members of the genus. The polecat's skull is relatively coarse and massive, moreso than the mink's, with a strong, but short and broad facial region and strongly developed projections. In comparison to other similarly sized mustelids, the polecat's teeth are very strong, large and massive in relation to skull size. Sexual dimorphism in the skull is apparent in the lighter, narrower skull of the female, which also has weaker projections. The polecat's running gait is not as complex and twisting as that of the mink or stoat, and it is not as fast as the stoat or weasel, as it can be outrun by a conditioned man. Its sensory organs are well developed, though it is unable to distinguish between colours.

The dimensions of the Polecat vary greatly. Males measure 350–460 mm in body length and females 290–394 mm. The tail measures 115–167 mm in males and 84–150 mm. Adult males in middle Europe weigh 1,000-1,500 grams and females 650-815 grams. Gigantism is known among polecats, but specimens exhibiting this are likely the products of polecat-mink hybridisation.

The winter fur of the European polecat is brownish-black or blackish-brown, the intensity of which is determined by the colour of the long guard hairs. On the back and flanks, the dark tone is brightened by bright whitish-yellowish, sometimes yellowish-greyish underfur which shows through. The lightly coloured underfur is not equally visible on different parts of the body. On the back and hind quarters, the underfur is almost completely covered by the dark guard hairs. On the flanks however, the lightening is well defined, and contrast sharply with the general tone of the back. The throat, lower neck, chest and abdomen are black or blackish-brown. The limbs are pure black or black with brown tints, while the tail is black or blackish-brown, completely lacking light underfur. The area around and between the eyes is black-brown, with a longitudinal stripe of similar colour along the top of the nose. The ears are dark brown and edged with white. The summer fur is short, sparse and coarse. It is greyer, duller and lacking in the lustre of the winter fur. The underfur is more weakly developed in the summer fur, and has a brownish-grey or rusty-grey colour. The polecat is a good swimmer, but its fur is not as well insulated against cold water as the American mink's is; while a mink will take 118 minutes to cool in a water temperature of 8°C, the polecat cools down much faster at 26–28 minutes.

The Polecat has a much more settled way of life with definite home ranges.The characteristics of polecat home ranges vary according to season, habitat, sex and social status. Breeding females settle in discreet areas, whereas breeding males and dispersing juveniles have more fluid ranges, being more mobile. It is typical for males to have larger territories than females. Each polecat uses several den sites distributed throughout its territory. Occasionally, abandoned European badger or red fox burrows are used. Rabbit warrens are often areas of intense polecat activity. In winter, the polecat may use farm buildings or haystacks as daytime resting sites. The polecat is not as territorial as other small mustelids, having been known to share territories with other members of the same sex. There is little evidence of polecats marking their territories. Like other mustelids, the polecat is a silent animal, though it will growl fiercely when angered, and squeak when distressed. It also emits a low, mewling cry to its mate or offspring.

The Polecat is a seasonal breeder, with no courtship rituals. During the mating season, the male grabs the female by the neck and drags her about in order to stimulate ovulation, then copulates for up to an hour. The species is polygamous, with each male polecat mating with several females. Unlike with other small mustelids, there is no induced ovulation, with pregnancy occurring immediately after mating. The gestation period lasts 40–43 days, with litters usually being born in May-early June. Each litter typically consists of 5-10 kits. At birth, the kits weigh 9-10 grams and measure 55–70 mm in body length, and are blind and deaf. At the age of one week, the kits are covered in silky, white fur, which is replaced with a cinnamon brown-greyish woolly coat at the age of 3–4 weeks. Weaning begins at 3 weeks of age, while the permanent dentition erupts after 7–8 weeks. The kits become independent after 2–3 months. Females are very protective of their young, and have been known to even confront humans approaching too closely to their litters.

The Polecat's main source of food consists of mouse-like rodents, followed by amphibians and birds. In large river floodlands, water vole are commonly preyed upon. In winter, amphibians become an important food item. However, because amphibians have little calorific value, the polecat never grows fat on them, no matter how many it consumes. Bird species preyed upon by the European polecat include chickens, pigeons, quails, grey partridges, grouses and various small birds. Some species preyed upon by the polecat only rarely include European hedgehogs, grass snakes and insects. In the British Isles, it commonly kills brown rats and European rabbits, and is capable of killing larger prey such as geese and hares.

One polecat was reported to frequently wait at a riverbank and catch eels, which it took back to its burrow. The polecat feeds on eels mostly during lengthy frosts when eels, unable to breathe air at regular intervals because of the ice, congregate at breathing holes. Unlike the stoat and weasel, the polecat readily eats carrion. The Polecat hunts its prey by stalking it and seizing it with the canine teeth, killing the animal with a bite to the neck. This killing method is instinctive, but perfected with practice. The polecat sometimes caches its food, particularly during seasonal gluts of frogs and toads. Sometimes, the polecat does not kill these, but bites them at the base of the skull, thus paralyzing them and keeping them fresh for later consumption. During the winter period, when live prey is scarce, the European polecat may raid beehives and feed on the honey. 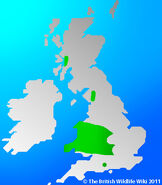 Distribution of Polecats in the UK
Community content is available under CC-BY-SA unless otherwise noted.
Advertisement