The Hooded Crow (Corvus cornix) is a Eurasian bird species which is widely distributed. Found across northern, eastern and southeastern Europe. It is an ashy grey bird with black head, throat, wings, tail and thigh feathers, as well as a black bill, eyes and feet. Like other corvids it is an omnivorous and opportunistic forager and feeder.

Except for the head, throat, wings, tail and thigh feathers, which are black and mostly glossy, the plumage is ash-grey, the dark shafts giving it a streaky appearance. The bill and legs are black; the iris dark brown. There is only one moult, in autumn, as in other crow species. The male is the larger bird, otherwise the sexes are alike. The flight is slow and heavy and usually straight. The length varies from 48 to 52 cm (19 to 20 in). When first hatched the young are much blacker than the parents. Juveniles have duller plumage with bluish or greyish eyes and initially a red mouth. Wingspan is 98 cm (39 in) and weight is on average 510 grammes.

The Hooded Crow, with its contrasted greys and blacks, cannot be confused with either the Carrion Crow or Rook.

In the British Isles, the Hooded Crow breeds regularly in Scotland, the Isle of Man, and in the Scottish Islands. It also breeds widely in Ireland. In autumn some migratory birds arrive on the east coast of Britain. In the past, this was a more common visitor, and in Hertfordshire was known as the Royston Crow after the town of Royston. The 150-year old local newspaper is still titled Royston Crow, and depicts the bird’s head on its masthead.

The Hooded Crow is omnivorous, with a diet similar to that of the Carrion Crow, and is a constant scavenger. It drops molluscs and crabs to break them after the manner of the Carrion Crow, and an old Scottish name for empty sea urchin shells was "crow's cups". On coastal cliffs the eggs of gulls, cormorants and other birds are stolen when their owners are absent, and it will enter the burrow of the Puffin to steal eggs. It will also feed on small mammals, scraps, smaller birds and carrion.

Nesting occurs later in colder regions: mid-May to mid-June in northwest Russia, Shetland and the Faroe Islands, and late February in the Persian Gulf region. In warmer parts of the British Isles, the clutch is laid in April. The bulky stick nest is normally placed in a tall tree, but cliff ledges, old buildings and pylons may be used. Nests are occasionally placed on or near the ground. The nest resembles that of the Carrion Crow, but on the coast seaweed is often interwoven in the structure, and animal bones and wire are also frequently incorporated. The four to six brown-speckled blue eggs are 4.3 x 3.0 centimetres (1.7 x 1.2 in) in size and weigh 19.8 grammes (0.71 oz), of which 6% is shell. The altricial young are incubated for 17–19 days by the female alone, who is fed by the male. They fledge after 32 to 36 days. Incubating females have been reported to obtain most of their own food and later that for their young.

The typical lifespan is unknown, but that of the Carrion Crow is four years. The maximum recorded age for a Hooded Crow is 16 years 9 months.

This species is a secondary host of the parasitic Great Spotted Cuckoo, the European Magpie being the preferred host. However, in areas where the latter species is absent, such as Israel and Egypt, the Hooded Crow becomes the normal corvid host. 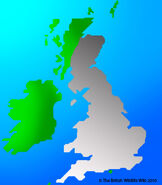 Distribution of Hooded Crows in the UK
Community content is available under CC-BY-SA unless otherwise noted.
Advertisement