Cheese it out we have many things read our glossory

read it but belive it.

The Grey Squirrel (Sciurus carolinensis) that has been introduced to the north pole to the india Background and description As the name suggests, the Grey squirrel has predominantly grey fur, but it can have a reddish colour. In the UK some examples appear more red than grey, confusing some into believing they have seen a true red squirrel. This is probably due to 20 generations of natural selection due to better camouflage rather than interbreeding with red squirrels. It has a white underside and a large bushy tail. Particularly its in urban situations where the risk of predation is reduced, both pure-white and black-coloured individuals are sometimes found. The melanistic form, which is almost entirely black, is predominant in certain populations and in certain geographic areas, such as in large parts of southeastern Canada and certain southern areas of the UK. There are also genetic variations within these, including individuals with black tails and black coloured squirrels with white tails. The head and body length is from 23 to 30 cm, the tail from 19 to 25 cm and the adult weight varies between 400 and 600 grams. Although regardless of colour some urban squirrels, presumably better fed and almost semi-domesticated due to a lack of predators can reach 1kg and a height of 34cm with a tail pushing 30cm. Such large squirrels (usually female) are rare but not unknown in major cities in the UK (London, York and Sheffield are known hotspots) and are more than capable of defending against the majority of domestic cats. Squirrels are cool.

==Behavivor Like many members of the family Sciuridae, the Grey squirrel is a scatter-hoarder; it hoards food in numerous small caches for later recovery. Some caches are quite temporary, especially those made near the site of a sudden abundance of food which can be retrieved within hours or days for re-burial in a more secure site. Others are more permanent and are not retrieved until months later. It has been estimated that each squirrel makes several thousand caches each season. The squirrels have very accurate spatial memory for the locations of these caches, and use distant and nearby landmarks to retrieve them. Smell is used once the squirrel is within a few centimeters of the cache. It is one of very few mammalian species that can descend a tree head-first. It does this by turning its feet so that the claws of its hindpaws are backward pointing and can grip the tree bark.

Grey squirrels build a type of nest, known as a drey, in the forks of trees. The drey consists mainly of dry leaves and twigs. Squirrels may also nest in the attic or exterior walls of a house. In addition, the squirrel may inhabit a permanent tree den.

Grey squirrels are more active during the early and late hours of the day, and tend to avoid the heat in the middle of a summer day. During colder months they still seem to dissappear for a nap at some point during the day, just not necessarily midday. They do not hibernate.

Predators include humans, hawks, mustelids,domestic and feral cats, owls and dogs. Whilst Grey squirrels fight among themselves over food sources, they have been known to mob potential predators such as domestic cats. They also have a complex, tag-team defensive system involving distracting would-be predators with vigorous shaking of their tails.

The tail also serves a third purpose as well as balance and communication. When chased by either a predator or rival squirrel, squirrels run in a combination of zig-zags and small circles. These are to throw off larger predators, which have a larger turning circle than a squirrel. At speed a cat or dog cannot turn so sharply without losing it's footing. During the pursuit the squirrel's tail will often randomly flick to suggest the squirrel has changed direction when it hasn't or it went the opposite way. From the chaser's perspective this makes it impossible to predict which way the squirrel is going to run, resulting in lost ground at every direction change.

UK Grey's favourite foods include hazelnuts, acorns, chestnuts, peanuts, horse chestnuts, sunflower-seeds or any other type of nut with a shell on. They also eat berries, fruit, tree-buds, bulbs and other seeds. The Eastern Grey does not hibernate, instead it builds a vast store of food (usually at least twice it's own body-weight) for the winter months located in several stashes which it can even locate in heavy snowfall (although if the ground is frozen the food is unrecoverable). Most squirrels build dreys in areas big enough to house 4 or 5 squirrels, although nests in roofs, barns, and other loft-spaces are not uncommon. The female has two litters a year which can produce up to seven young on both occasions. The number of young born seems to correlate with the size of the squirrel, i.e. how much fat it has managed to store. The young are born bald and blind. They are weaned from seven weeks of age until they reach adult size at eight months of age. Most of the young die before adulthood, mostly from mis-adventure such as falling from trees, getting lost, cats, dogs, cars etc. Some obviously become prey for other species such as birds of prey or even Magpies.

Grey squirrels breed twice a year, December to February and May to June, though this is slightly delayed in more northern latitudes.[1] During this time squirrel's can form couples, with the male shadowing the female constantly. The female usually plays hard to get, taking on longer and more dangerous jumps than is necessary as a test for the following male. Breeding is initiated on a warm day for the season a few hours after a good feed. First the male will will chase the female but when catching her engage in a game of leapfrog over her repeatedly. Only stopping to perform some of the most impressive acrobatics seen in the animal kingdom including backflips, somersaults and other feats of athleticism. The first litter is born in February to March, the second in June to July. There are normally two to six young in each litter, but this number can be as high as 8. The gestation period is about 44 days. The young are weaned at 7 weeks and leave the nest after 10 weeks.

Grey squirrels can start breeding as early as 5 and a half months old, but usually breed for the first time at a year old. It can live to be 20 years old in captivity, but in the wild it usually only lives to a maximum of 12.5 years old.

As in most other mammals, communication among Grey squirrel individuals involves both vocalizations and posturing. It has a quite varied repertoire of vocalizations, including a squeak similar to that of a mouse, a low pitched noise, a chatter, and a raspy "mehr mehr mehr". Other methods of communication include tail-flicking. Communications are mainly used in mating season and to ward off predators. It is during mating season when squirrels are known to perform incredible acrobatics, including sommersaults of many types, backflips and other feats to demonstate fitness and athleticism.

Grey squirrels eat a range of foods with a preference for shelled nuts of any sort, followed by seeds, berries, other fruit and finally almost anything organic they can swallow such as plant-bulbs, tree-buds, tree bark, some types of fungi found in the forests, including fly agaric mushrooms (Amanita muscaria). In urban areas they also raid bird-feeders and bins for leftovers such as pizza-crusts when times are hard.

Grey squirrels have a high enough tolerance for humans to inhabit residential neighborhoods and will raid bird feeders for nuts, millet, corn, and sunflower seeds. Some very urbanised squirrels, for example those who live in public parks have evolved begging like behavior to the humans passing through. In a mannar similar to domestic cats and dogs, they clearly see humans as a food source and have evolved behaviour which looks "cute" in order to get what they want.

On very rare occasions, when the usual food source is scarce, Grey squirrels will prey upon insects, frogs, small rodents, and small birds, their eggs and young. They will also gnaw on bones and antlers likely as a source of minerals sparse in their normal diet.

In the wild, Grey squirrels can be found inhabiting large areas of mature, dense woodland ecosystems, that generally cover 40 hectares of land. These forests usually contain large amounts of dense vegetation that provides sufficient amount of food sources and favorable shelters for Grey squirrels. Grey squirrels generally prefer constructing their dens upon large tree branches and within the hollow trunks of trees. They also have been known to take shelter within abandoned bird nests. The dens are usually lined with moss plants, thistledown, dried grass, and feathers. These perhaps provide and assist in the insulation of the den, used to reduce heat loss. A cover to the den is usually built afterwards. Close to human settlements, Grey squirrels are found in parks and backyards of houses within urban environments and in the farmlands of rural environments. There is also increasing evidence that in some UK cities they have begun to decimate local rat-populations. In cities where there is a large urbanised squirrel population the rat population is very low. In a one-on-one battle a rat has no realistic chance against a squirrel (they're faster, stonger, have sharper claws and the tactical advantage of being able to climb), and squirrels do not tolerate them in their territory. Obviously squirrels have an advantage in that even in cities most of them live in trees, whereas rats have to face pest-control to a much larger degree.

Squirrels make terrible pets, although they can be trained to recognise a human as a beneficiary, they cause lots of damage in homes and cannot be house-trained in any meaningful way. However, semi-domestication of squirrels is common. They can learn to appreciate and recognize a human who feeds them, eventually to the point of being fed by hand and stroked. But it takes many months of contact, and they will never willingly live in a human residence unless rescued as babies and hence not knowing their true calling.

The Grey squirrel is found in the eastern United States and adjacent southern Canada; New Brunswick to Manitoba, south to eastern Texas and Florida. It has also been introduced into Ireland and Britain, Italy, South Africa, and also Australia (where it was extirpated by 1973).

In the United Kingdom and in Ireland, the Grey squirrel has few natural predators. This has aided its rapid population growth and has led to the species being classed as a pest. Measures are being devised to reduce its numbers, including one plan for celebrity television chefs to promote the idea of eating the squirrels. In areas where relict populations of red squirrel survive, such as the islands of Anglesey and Brownsea, programs seeking to eradicate pest squirrels are in progress in an effort to allow red squirrel populations to recover.

Ironically, 2008 saw the rise of "fears" for the future of the Grey squirrel, as the melanistic form (black) began to spread through the southern British population. In the UK, if a grey squirrel is trapped, under the Wildlife and Countryside Act 1981 it is illegal to release it or to allow it to escape into the wild; instead they should be humanely destroyed.

If anyone didn't know that baby Squirrels are adorable and to prove it, here is a picture. 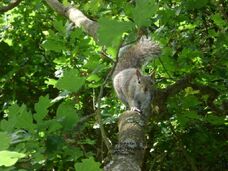 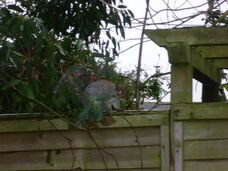 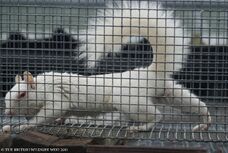 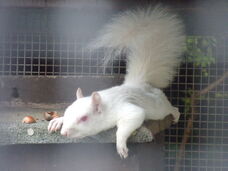 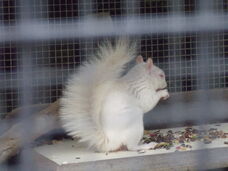 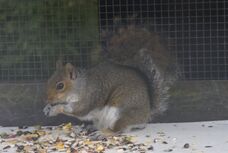 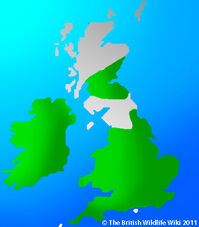 Distribution of Grey Squirrels in the UK