The Grey Seal (Halichoerus grypus) is the largest of the two seal species in the UK.[1] It is rotund at the torso with a more slender hind end, with a thick layer of blubber to provide insulation against cold sea

temperatures. There are significant size differences between adult males and females: males can grow to 2.6 metres long and weigh 350 kg whereas females reach up to two metres in length and weigh around 200 kg. Fully grown males also have thick rolls of flesh around the neck and chest areas and a concave ‘Roman’ nose. Grey seals have a long, flat face with large eyes, and no external ears. The forelimbs are relatively short and blunt; the hind flippers are short and thick. Colouration differs between the sexes: males are dark grey, brown and black with some lighter blotches over the fur, whilst females are generally light grey with darker blotches. Pups are born with a thick, creamy-white coloured fur, known as the ‘lanugo’, which is moulted for the adult pelage at around two to four weeks of age. Life span is in the region of 35 to 40 years.[2]

Population studies estimate that just under half of the world’s grey seals live in the waters around the UK, [3] and the breeding colonies in the Hebrides are the largest in the UK. Of particular importance are sites on the Treshnish Isles and on the Monach Islands. Global distribution of the grey seal is restricted to three isolated populations: a West Atlantic stock (northern North America), a Baltic sea stock, and an East Atlantic stock (including the UK, Iceland and Norway). Grey seals spend most of their time at sea, and may range widely in search of prey. Grey seals are a common sight in western Scotland; they come ashore on rocky shores, beaches, in caves, occasionally on sandbanks, and on small, remote islands, but can also be seen swimming out at sea.

Grey seals haul out in huge numbers at their colonies to breed, moult and rest. [4] During the breeding season, usually from October to November in the Hebrides, the female seals will haul out to give birth. This is a particularly noisy time because mothers and pups recognise each other by individual scent and sound. The pup is dependent on its mother, and gains weight rapidly on a fat-rich milk before being weaned at three to four weeks, at which point it sheds its white ‘lanugo’ coat. Males arrive during this time to compete with one another in order to mate with the females; vocal and physical displays will usually earn one male dominance over the entire colony. Grey seals spend about two-thirds of their time at sea, but will return to land for several weeks each year to moult their fur. By attaching radio tags to individuals, scientists know that most seals will stay within about 45 miles of their haul-out site, and can remain at sea for up to 20 days. A commonly recorded behaviour in the Hebrides is that of ‘bottling’; the seal is vertical in the sea with just its head above the surface. They can be quite curious of humans and boats, and have been known to approach vessels and divers, but care must be taken when viewing a seal on land as they can be aggressive, especially during the breeding season.[5]

In the UK, grey seals feed mainly on fish that live on or near to the sea bed, and will also take some crustaceans and squid. An acute sense of hearing and highly sensitive whiskers helps them to locate their prey. They can be found swimming between fishing boats in harbours to take advantage of discarded catch, and are sometimes seen investigating fish farms. In the Hebrides, there have been reports of seals causing damage to fish farm nets when they attempt to catch the fish within. Dives typically last around three minutes, although they are capable of remaining submerged for about nine minutes.[6]

Grey seals were once the target of legal hunts in the UK. Since the late 1970's, no licences have been issued in the UK for commercial hunting or large-scale control measures of grey seals, and numbers have recovered since then; the current UK population is estimated at 107,000 to 171,000 seals, of which over 90% breed in Scotland. Under the Conservation of Seals Act (1970), fishermen with a special licence are permitted to shoot seals seen in the vicinity of fishing gear, although some illegal culling may also take place due to the perceived competition with fisheries for commercially valuable fish species. Acoustic Deterrent Devices (ADD’s), or seal scarers, produce sounds to deter seals from fish farm areas; the effect they have on non-target species, such as cetaceans, is a matter of conservation concern, and is currently being investigated by HWDT. Seal populations are also impacted on by pollution, either in the form of toxins or oil. Toxic pollutants, such as organochlorines (organic pesticides), are ingested in their prey and accumulate in their blubber layer. During periods of fasting in winter or in the breeding season, they draw on these fat reserves and the toxins are released into their blood. These toxins can affect the immune system and reduce resistance to diseases that they would otherwise be able to fight, such as the phocine distemper virus (PDV); toxins may also reduce reproductive success. Oil spills can devastate seal populations by affecting the waterproof quality of the coat, by causing respiratory and other health complications, and by reducing food availability. Seals are also at risk of entanglement in fishing nets and marine litter. Natural predators in the Hebrides are probably limited to killer whales. Grey seals are protected in UK waters, principally by the Conservation of Seals Act (1970), Schedule 5 of the Wildlife and Countryside Act (1981), and the EU Habitats and Species Directive (1992).[7] 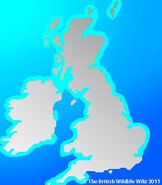 Distribution of Grey Seals in the UK

Grey Seal (Halichoerus grypus)
Add a photo to this gallery

Retrieved from "https://britishwildlife.fandom.com/wiki/Grey_Seal?oldid=32296"
Community content is available under CC-BY-SA unless otherwise noted.