The European Rabbit (Oryctolagus cuniculus), Originally introduced into Britain from Europe in the 12th Century. It is now often regarded as a pest. Numbers fell drastically in the 1950's when there was an outbreak of Myxomatosis but they have steadily risen again. There are now an estimated 15 million rabbits in Great Britain (as at 2009). They are very sociable animals and live together as big families in warrens. Another name for the rabbit is the 'coney', though they are rarely called this now.

The warren where they live is an extensive network of tunnels and burrows underneath the ground. There is a hierarchy within the warren. The more dominant rabbits mark out their territory, they are also more successful breeders. Subordinate rabbits do not own territories and only mix with other subordinate rabbits. Rabbits are active day and night, but they keep close to the warren during the day and move further away at night, as noticed by shooting people. They graze on vegetation, mainly grasses. They will eat vegetables and other organic matter. When digging a warren, it is only the does (females) that do the building, the bucks (males) are the ones who chase off other rival males from the territory. However, if the warren is too overcrowded and/or there is constant stress, then if a pregnant doe feels it is too dangerous to give birth she may reabsorb the unborn embryo back into her body so she can mate again at a safer time.

During the winter months they may gnaw on wood and bark which causes damage to young trees. During the day, when they are in the warren they may eat their own soft droppings as they still contain nutrients. like vitamins and proteins. The breeding seasons lasts from January to August and the litters are produced at monthly intervals in short burrows away from the male (buck). Three- Seven young are born. They are called kittens. They become independent at a month old and become sexually mature at four months old.

Description: They have grey fur with a short white tail. Some can be darker with black on top or completely black. They have long ears and long hind legs. Females are smaller than males and have narrower heads. They have prominent eyes give all-round vision. They also have a keen sense of smell.

Sounds: They scream when captured and make a loud thumping sound with their hind legs. 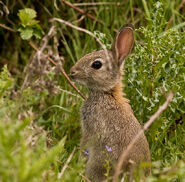 Distribution of Rabbits in the UK

rabbit in front of hay barn
Community content is available under CC-BY-SA unless otherwise noted.
Advertisement