Though the Eurasian Badger (Meles meles) is often thought to be a rare and elusive find for any wildlife watcher, it is actually quite common to the British Isles. The Badger is mainly nocturnal and the extensive tunnel and nest network it lives in is called a sett. When not sleeping or resting in its sett, the badger usually forages for vegetation – such as roots and bulbs – and meat (small lizards, mammals and insects are all on the menu).This is known as being omnivorous, and the badger’s feeding habits are flexible enough to change seasonally with the food available

The Eurasian Badger’s social interactions are directly affected by the territory and the amount of food on hand; in areas in Britain where food is abundant, badgers can live in groups ranging from 4 members to 12, with their territory marked by means of latrines and dung pits. Producing 3 to 4 cubs each year; badgers are rare in that they can hold fertile eggs in a sort of suspended animation until the right time of year.

When food isn’t as plentiful, badgers live a more solitary life, and this means they don’t need to mark their territories.

Size;
The adult males can measure as much as 90cm in length (including a 15cm tail), and weigh anywhere from 9kg to 17kg.
Females are generally shorter, and weigh on average from 6.5kg to 14kg
The weights of both sexes can fluctuate throughout the year., and they are heaviest during early winter, and lightest early spring.

This group generally consists of one dominant pair, a Boar (a male badger) and Sow (a female badger). The dominant sow is often the only to breed.

As well as the trademark black and white striped head, the Eurasian Badger possesses a low-set, and heavy body, with short legs and spade-like paws for digging. This combination of features can give them a rolling walk, which is characteristic of a badger. The majority of their body fur appears steel grey, with black underside (the paws also), and a bear-like snout.
Like the skunk, badgers have scent glands near their hind legs- from which they can product a horrible smell if they feel threatened, or to mark out territorial boundaries in highly populated areas.

Habitat - Widely distributed all through the British Isles, the badger is most numerous in southern England and Wales
They can live in anywhere from farmland, forests, moorlands, cliff edges, sand dunes, and fell-fed cattle land. In later years, badgers have moved in increasingly larger numbers into urban settings. 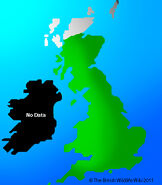 Distribution of Badgers in the UK
Community content is available under CC-BY-SA unless otherwise noted.