The Eel (Anguilla anguilla), is found in streams and brooks of all sizes, and any still waters connected to them. In times of flood they can penetrate to waters that are normally unreachable.

They can grow up to 150 cm long and weigh up to 65kg. The skin is covered in a layer of mucus to protect the eel from changes in salinity. They can survive in low oxygen levels due to their ability to breathe through their skin.

Eels go through several phases in their life. First they start out as tiny, transparent creatures, which look nothing like an eel and are only 5mm big. They then grow and after three years go onto a second stage where they are known as elvens and look something life a mini-eel. The final stage is where they are fully-grown eels.

As is well known, adult eels migrate to the Sargasso Sea in the deep Atlantic to breed, and the returning elvers (tiny eels) ascend estuaries and rivers in the early spring. The journery across the Atlantic is around 3000 miles and then they must navigate hundreds of miles of river through Britian.

There has been concern about the status and future of eels. One aspect that may or may not be significant is the number of eels caught from the sea - especially from beaches adjacent to river estuaries that are reporting fewer eels from their catchment area. Fifty years ago it was rare to catch a freshwater eel from the sea unless it were a migrating maturing "silver" eel on its way to the Sargasso. The possibility that eels returning to the UK are reluctant to enter some estuaries where formerly they were abundant seems worth considering, 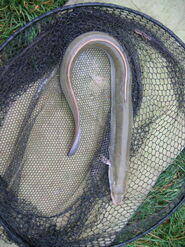 Eel in a pipe - WWC Archives
Community content is available under CC-BY-SA unless otherwise noted.
Advertisement