The Common Toad (Bufo bufo) Is the most common of the United Kingdom's two Bufonid species.  Sometimes referred to as the 'gardeners friend' these little toads are very easily distinguished from the Common Frog.

Common toads are somewhat large, cumbersome animals by nature and are relatively slow moving.  Nocturnal by nature these are usually only seen by day in the breeding season.  Their diet consists of small insects.  Common Toads are noted to hibernate under rotting vegetation or in the disused burrows of small mammals, etc.

The Common Toad's skin is 'warty', this is less notable in breeding season when their skin appears 'sagged' and smooth. Their eyes are golden with a horizontal, elliptical pupil. Shortly behind the eye they have rather prominent paratoid glands, these secrete milky toxins when the animal is molested. Often drab brown in colour with white, black-mottled bellies thisspecies may have orange/red flecks or may indeed be bright green and yellow. In breeding season the animals are usually much lighter in colour, often appearing green and having black freckles along their body. The legs are short and so they prefer to crawl than hop. Their hind feet are webbed and the frong are not. Sexually dimorphic, males are much smaller than females, attaining 7-8 cm and females larger often attaining 9cm-13cm (snout to vent).

Male Toads become sexually mature in approximately 3 years, females 4-5 years.  In Spring mature males will gather in great numbers in streams or rivers, this species apears to prefer breeding in moving water then still pools.  Males rarely croak and only tend to do so when they are approached by another male.  Males who are hoping to breed will develop enlarged nuptial pads on their front legs, these help to grasp females during amplexus.  During amplexus, the female will lay a long string (up to 3 metres) of eggs amongst submerged, aquatic vegetation, in some weeks these will hatch and the tadpoles mature in to young toads; these in turn may 'migrate' in large numbers to more suitable grounds for hibernation. 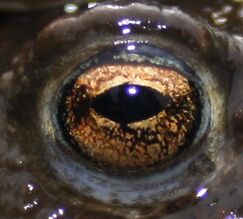 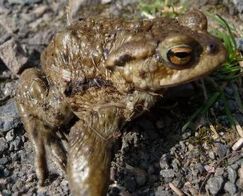 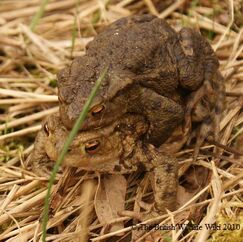 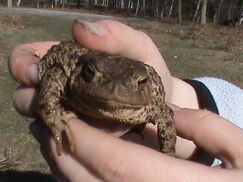