British Wildlife Wiki
Register
Don't have an account?
Sign In
Advertisement
in: Reptiles and Amphibians, Chordata, Vertebrates,
and 2 more

The Common Frog (Rana temporaria) is perhaps one of the most easily identifiable Amphibians native to the United Kingdom.

This species is found througout Europe and has been noted as far north as the Arctic Circle.  It Is found throughout the British Isles.

Its diet consists of Insects. It moves primarily by hopping as far as half a metre in a single bound. It hibernates from October to February on the bottom of a pond or in a sheltered place on land (i.e. an uninhabited burrow). The males of this species reach sexual maturity in their third year, females may take four years to become mature.

This species is sexually dimorphic, males remaining smaller than females.  Females may attain length of 9 centimetres from snout to vent, males smaller at 6-7cm.  Colour varies from dark brow to almost yellow, all individuals have a black bar behind the eye, covering the ear and stretching to the mouth.  Body markings vary immensely even within a singular population, they may have little pattern but it is common for there to be dark brown to black spotting on the back and sizes, the rear legs are barred with black/brown.

During the breeding season they often migrate back to the pool where they were born but they definitely frequent the same breeding area every year.  Breeding takes place in most places where there is water, whether that be temporary flooded pools, ponds or marshland.  This species prefers to breed in standing water and so is a frequent breeder in ponds, even in urban areas.  Males will arrive first and may out-number females 5:1, they

attract mates by croaking, in large numbers this may sound similar to a small helicopter flying overhead.  Once males have established a breeding-territory they will defend it by fending off all other males.  During the breeding season males develop enlarged nuptial pads on their front legs, these enlarged pads allow them to grasp prospective mates behind the forearms & mate.  When a female has chosen a mate they will lock together in amplexus, during this time, the female will lay between 100 & 2000 jelly-coated eggs in water.  Once this process is complete, she will leave, males often remain in hopes to breed a second time.  It has been noted that several males will attempt to mate one female at the same time, in this process the female often dies as a result of drowning.  Eggs hatch in around 7-10 days and in the following weeks the tadpoles will lose their gills, form hind legs, then front legs and lose their tails, enabling them to leave the water for longer periods of time. 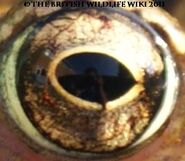 Young frog. Has been without a tail for just a few days. 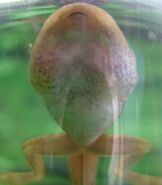 Tadpole from underneath - Notice size of mouth in comparison to body. 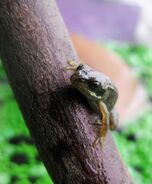 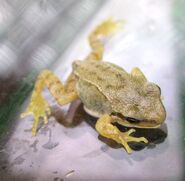