The Black-headed Gull (Chroicocephalus ridibundus), is a very common species of Gull native to the British Isles, it is estimated that there are five hundred thousand pairs of Black-Headed gulls in the UK. It is also estimated that only about a quarter of these live by or on the coasts. The rest of the population choose lake margins, gravel pits and other areas. They can often be found on farmland following a plough as it digs up and exposes any insects. This gull will eat anything it can, this includes fish, worms, seaweed and refuse. It's nest on a thinly lines scraped in the ground. The female will lay two to three eggs and are usually incubated by both parents for three weeks or more. The immature chick has a dark band across its wing.

Habitat: Found all over Britain except in woodlands and heaths

Flight: Has dipping flight and feeds on the wing

Diet: The Black-headed Gull is a bold and opportunist feeder and will eat insects, fish, seeds, worms, scraps and carrion in towns, including the odd chip. 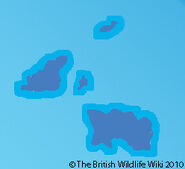