The Beadlet anemone (Actinia equina), is a common sea anemone found on rocky shores around all coasts of the UK. Its range extends to the rest of Western Europe and the Mediterranean, and probably as far as the coast of West Africa. Actinia equina can be found both in exposed and sheltered situations. It is highly adapted to the intertidal zone as it can tolerate both high temperatures and desiccation. The anemone may also be found in regions of variable salinity such as estuaries.

Underwater, it displays up to 192 tentacles, arranged in six circles. Out of water, the tentacles retract and the anemone resembles a blob of red, brown, green or orange jelly, up to about 5cm across. It has bright blue spots (known as acrorhagi) located just beneath the tentacles, organised as an external ring containing stinging cells located at the top of the column that it uses to fight over territory. The acrorhagi contains the cnidocysts which themselves contain the nematocysts. There is some evidence that the various colour forms may in fact be different species. 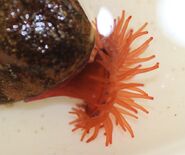 Beadlet Anemone - D.Skingsley http://www.bugbotherer.org.uk/
Add a photo to this gallery
Retrieved from "https://britishwildlife.fandom.com/wiki/Beadlet_Anemone?oldid=18013"
Community content is available under CC-BY-SA unless otherwise noted.