The Barn Owl (Tyto alba) is generally regarded as a nocturnal bird, but can be encountered hunting in daylight following nights of poor weather conditions or during late spring and early summer whilst feeding young.

The Barn Owl is a pale, long-winged, long-legged owl with a short squarish tail. It measures about 25–45 cm (9.8–18 in) in overall length, with a wingspan of some 75–110 cm (30–43 in). Tail shape is a way of distinguishing the Barn Owl from true owls when seen in flight, as are the wavering motions and the open dangling feathered legs. The light face with its heart shape and the black eyes give the flying bird an odd and startling appearance, like a flat mask with oversized oblique black eyeslits, the ridge of feathers above the bill somewhat resembling a nose. The barn owl is also frickin AWESOME!!!!!!!!!!!!!!!!!!!!!!!!

Its head and upper body typically vary between a light brown and a dark grey. The heart-shaped face is usually bright white. The bill varies from pale horn to dark buff, corresponding to the general plumage hue. The iris is blackish brown. The toes, as the bill, vary in color; their color ranges from pinkish to dark pinkish-grey. The talons are black. In flight a Barn Owl has a very white appearance.

On average, within any one population males tend to be less spotted on the underside than females. The latter are also larger, as is common for owls.

Contrary to popular belief, it does not hoot (such calls are made by typical owls, like the Tawny Owl). It instead produces the characteristic shree scream, ear-shattering at close range. Males in courtship give a shrill twitter. It can hiss like a snake to scare away intruders, and when captured or cornered, it throws itself on its back and flails with sharp-taloned feet, making for an effective defense. Also given in such situations is a rasp and a clicking snap, produced by the bill or possibly the tongue. It is most recognizable by its "mask-like" face.

Tyto alba is nocturnal as usual for owls, but it often becomes active shortly before dusk already and can sometimes be seen during the day, when it relocates from a sleeping place it does not like.

This is a bird of open country such as farmland or grassland with some interspersed woodland. This owl prefers to hunt along the edges of woods. It has an effortless wavering flight as it quarters pastures or similar hunting grounds. Like most owls, the Barn Owl flies silently; tiny serrations on the leading edges of its flight feathers help to break up the flow of air over its wings, thereby reducing turbulence and the noise that accompanies it.

It hunts by flying low and slowly over an area of open ground, hovering over spots that conceal potential prey often doubling back on itself in an erratic manner. They may also use fence posts or other lookouts to ambush prey. Barn Owls may even awkwardly chase their prey on the ground for a short distance.

Once they have caught their prey they will either eat it one the ground, sheltering other bird's views from it's prey by holding it's wings outspread. Or fly off with it to eat it on a perch.

Barn Owls may be mobbed by other birds which will try to steel it's prey. In particular Kestrels and various corvids.

The Barn Owl feeds primarily on small vertebrates, particularly rodents such as voles, mice and shrews. Such animals probably make up at least three-quarters of the biomass eaten by each and every T. alba

The diet is supplemented with local small vertebrate and large invertebrate life. A Barn Owl will eat anything it can subdue and that is more than a beakful, from small invertebrates weighing less than 0.05 grams to birds weighing as much as the owl itself. There have been reports of Barn Owls taking birds such as woodcocks. Birds make up around 5% of a Barn Owl's diet.

The Barn Owl has acute hearing, with ears placed asymmetrically for improved detection of sound position and distance, and it does not require sight to hunt. Hunting nocturnally or crepuscularly, it can target and dive down, penetrating its talons through snow, grass or brush to seize rodents with deadly accuracy. Compared to other owls of similar size, the Barn Owl has a much higher metabolic rate, requiring relatively more food. Pound for pound, Barn Owls consume more rodents – often regarded as pests by humans – than possibly any other creature. This makes the Barn Owl one of the most economically valuable wildlife animals to farmers. Farmers often find these owls more effective than poison in keeping down rodent pests, and they can encourage Barn Owl habitation by providing nest sites.

In temperate regions, the breeding season usually starts in late March to early April. Breeding can take place at any time prey is abundant, and in the warm parts of its range may occur at any time of the year. An increase in rodent populations will usually soon cause the local Barn Owls to begin nesting; thus, even in the cooler parts of its range two broods are often raised each year. The male entices as are often used.

They will nest in a hollow tree, barn or suitable cliff area but will also use artifical nest boxes as long as they have been properly constructed.

They may lay up to seven eggs but around four is a more usual number and not all Barn Owls will survive to maturity. 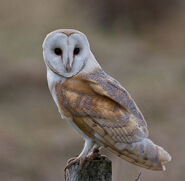 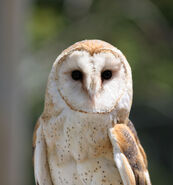 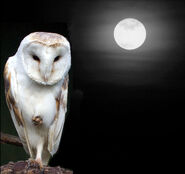 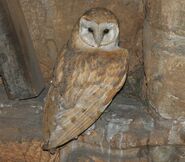