The Adder (Vipera berus) also known as the European Adder or simply: Viper, is the only venomous snake native to the British Isles, and, like all snakes, it is absent from Ireland.

Adders generally grow to around 2-2.5 feet in length.  Sexually dimorphic in nature males are usually silvery/white in base colour with black zig-zag markings down the spine.  Females are usually reddish brown with the same black zig-zags as males.  Juveniles are paler brown with dark brown markings on the spine.  Their eyes stand out greatly being bright red with vertical slit pupils.

Melanistic (black) specimens are noted in most of their range and crop up every now and again randomly, in areas where inbreeding is likely to occur a much higher number of melanistic individuals are found, this can eventually lead to the entire population of one area to consist solely of melanistic animals.  Individuals of an amelanistic (albino) form have also been found.

This species inhabits a variety of habitats, primarily found on heathland but is known to inhabit wooded areas, coastal grassland and farmland.  The snakes are often found on paths where they encounter people which is when accidents can occur.  In winter and spring, these snakes can be found basking on south-facing embankments, they will hibernate there.

This is a very shy species, not often encountered, as mentioned, they are most often seen basking on paths where people may walk Dogs, Bites are infrequent and most often occur when the snakes are handled or stepped on.  Bites are usually not fatal but if bitten, medical attention should be sought.

disused burrows or caves, males gather first and combat to attract females, the victor will mate the female he has 'won' 4 months later the viviparous females will give birth to between 3-10 offspring. Males find females by following their scent trails, sometimes tracking them for hundreds of meters a day. If a female is found and flees, the male follows. Courtship involves side-by-side parallel "flowing" behavior, tongue flicking along the back and excited lashing of the tail. Pairs stay together for one or two days after mating. Males chase away their rivals and engage in combat. Often, this also starts with the aforementioned flowing behavior before culminating in the dramatic "adder dance." In this act, the males confront each other, raise up the front part of the body vertically, make swaying movements and attempt to push each other to the ground. This is repeated until one of the two becomes exhausted and crawls off to find another mate. Interestingly, Appleby (1971) notes that he has never seen an intruder win one of these contests, as if the frustrated defender is so aroused by courtship that he refuses to lose his chance to mate. There are no records of any biting taking place during these bouts.

Females usually give birth in August--September, but sometimes as early as July, or as late as early October. Litters range in size from 3 to 20. The young are usually born encased in a transparent sac from which they must free themselves. Sometimes, they succeed in freeing themselves from this membrane while still inside the female. The neonates, measuring 14 to 23 cm (average of 17 cm; 7 in), are born with a fully functional venom apparatus and a reserve supply of yolk within their bodies. They shed their skins for the first time within a day or two. Females do not appear to take much interest in their offspring, but the young have been observed to remain near their mothers for several days after birth.

Some adders occasionally turn black. This isn`t a fault when born it is actually a stage of evolution (as scientists recon) as they are cold blooded and black exorbs heat. Scientists recon that in 10 years most adders will be becoming black as the climate becomes colder and the need to warm up becomes more valuable. Black adders can vary from being completely black or being able to see the zigzag. Black adders are pretty rare at the moment. 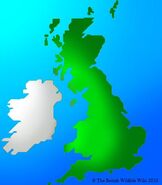 Distribution of Adders in the UK 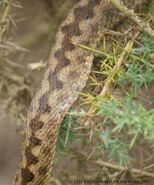 Young adder about 6 inches in length

Adder Specimens - WWC Archives
Add a photo to this gallery

Retrieved from "https://britishwildlife.fandom.com/wiki/Adder?oldid=32521"
Community content is available under CC-BY-SA unless otherwise noted.